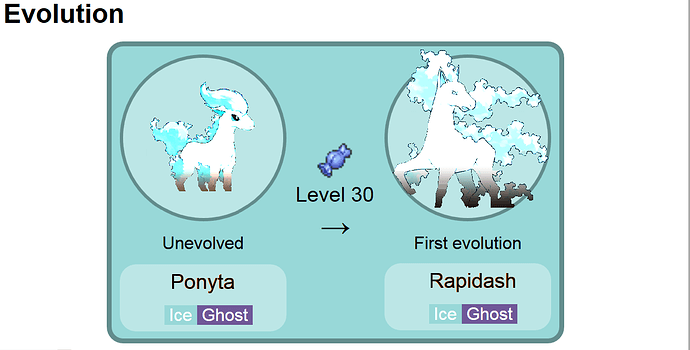 Hello Guy, this is my first own custom delta pokemon line and related concepts. Let’s see if there is any chance to appear in the future version game.

HM/TM Learnsets, Biological Background, Base Stats will be issued later if applicable.

I personally think it should be called the Mist Pokemon, since you`re just saying their types and that it is a horse.

It is highly appreciated.

HM: Flash, Defog* -> If used by the user, his ghost type will temporarily be changed to the normal type for the following two to three turn, then is returned afterward.

the deficiency of Ponyta for using Defog is based on his physical disposition that he needs to inhale the surrounding fogs in his body, and that makes his body heaviler and more tangible and concrete enough to be attacked by physical moves. But, after evolving to Rapidash, the deficiency is greatly improved because of the change in body mass and skillful training.

Remarks on his appearance: four slender legs, no black hooves and a horn on its forehead. It also has small but brutal blue eyes and pointed but vague ears with blue insides. Blue but almost transparently white flame-shaped mist stream from neck and part of its back, and also forms his tail.

He is hlghly agile and battlesome Pokémon. He likes chasing everything that moves in hopes of battling with him. With no hooves, he doesn’t touch the ground. The faster he goes, the longer the swaying mist of its mane and the more transparent its whole body will become. At an all-out gallop, he is almost invisible, just like being mixed into air.

Thanks, Dude. Recently, I think whether it is better to make its body color like silver and transparent and its texture like Ditto.