Ok, I made crap sprites and sphealigon-XIV PM’d me with these beauties:

what is that little “aura?” around him

A ghost. I thought it might’ve made it seem like a bit more of a ghost type if I added a little ghost coming out of it. If you have any suggestions for the sprite, then please tell me.

oh i can see that. Maybe you could make the ghost something fairly like, so it incorporated the fairy typing too.

Then again I’ve never created a sprite, so you might as well ignore me, but I like the sprite as of now too.

Thanks! I’ll get right on it.

I thought I might add a full on aura to it so it would have more of a “possession” feeling to it and I thought it might be a good idea to make it purple because to me, that screams fairy and ghost. 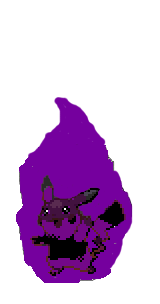 I like the idea of the aura completely surrounding it, but now the aura kind of blends in with the pikacus’s skin and you aren’t able to see all of the details properly.

Im not exactly sure if an aura, would make it sound more like a fairy and ghost type, instead i like the idea of the ghost coming from behind him, and as though of scarring the foe away, while the pikachu was more of a fairy acting all innocent.

Well, the damage is done and it would take a while to get the original picture back… But on the other hand, I made a Delta Raichu and i’ll make 2 copies of that.

sorry if I sounded like i didn’t like the photo, It still looks nice, but i just thought that the other design fit the role better.

Ok, thanks. BTW do you have any thoughts on raichu?

imo i like the pikachu much better than the raichu, because of the unique fact of the little ghost behind the pikachu, if you were able to incorporate that into maybe a more frightening version of a ghost onto the raichu, then I would like it a lot more. I also don’t know what the little shadow things are on the raichu’s body?

good job on the sprites again, they look nice

Finished the new sprite! (Sorry it took so long, I took a nap). 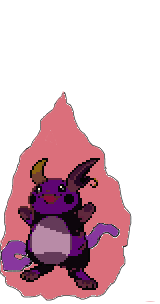 It looks good, but i just don’t think it looks sinister enough (the ghost behind it). I feel that you really have to emphasize the ghost type but also keep the fact of the fairy, and i think you can keep the fairy, by including it somewhere physically on the raichu. But then again, i have never made a sprite, so i don’t really know how tough it is (it probably is really hard) and how much you could customize the sprite.

I feel that I have come this far to change things from being based around ghosts to ghost and fairy, so I’m making the type just pure ghost.

If you’re gonna make it pure ghost then rather having it as a pure aura surrounding the pikachu/raichu, you should have a small ghost coming from behind the pokemon and looking sinister. This is like a ghost that haunts the pikachu and scares away all foes. At least thats what comes to my mind, when thinking of a ghost type pikachu. I think it would be cool if the ghost started out small and puny, but when it evolves it becomes more terrifying and scary.