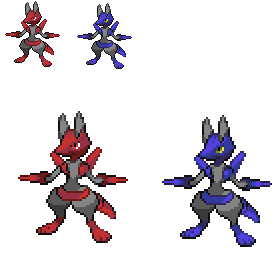 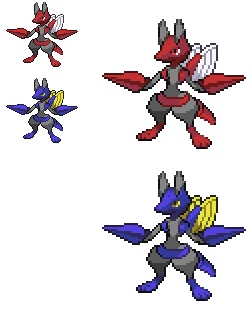 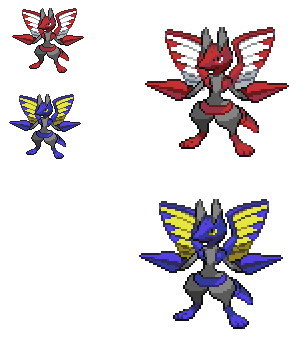 Type: Bug/Dark
Ability:Light Metal (HA): Steel Worker
Dex: The little nubs on this Pokemon’s back are similar to that of Scizor. This Pokemon has no hands instead it uses its sharp pincers to defeat its opponent by landing precise strikes to its body.
Dex V2: The wings on this Pokemon are not capable of flight but are good at Decreasing or increasing this Deltas rate of falling allowing it to get better attacks on its opponent.

At the Moment i’m working on the delta roulu and mega so give me some time. And yes I know there’s one in the game but i spent awhile on this and want to see what people think of it.

I don’t see its pincers,its typing doesn’t fit in its appearance,maybe you should add bug-like features to make it look like a bug type,still looks great though, keep up the good work

…You just put Scizor’s wings onto it.

I thoughts that’s what people wanted me to add

make your own wings and parts, it really looks lazy

I just realised its arms are beedrill’s stingers recolored

You are not making it better… Scizor wings… Beedrill stingers…