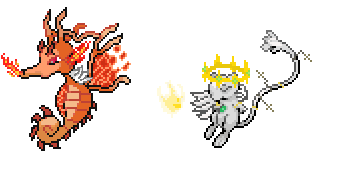 Hellfire kingdra is only ever found and seen when the holon volcano erupts it thrives inside lava and is said to rival a gyarados in its rage
Type:Fire Rock

Blessed mew a delta that has been blessed by arceus it is said to often fight Sin mew its counterpart
Type:fairy normal (or electric)
(my fan game type is fairy light for it)

I like the design of Kingdra. So cool! I mean… HOT!

The delta Kingdra looks awesome and the mew isn’t too shabby.