I have a phobia of spiders, but I love the way they look and how they live. I see that there are little to none Galvantula deltas. So I made one based off of a deadly, but beautiful Spider, the Black Widow 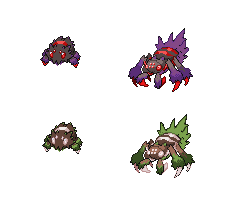 The Typing would be Dark Poison.

Pokedex entries:
Joltik: When Born, the Joltik relies on it’s mother to give poisoned food. Normally, this would be dastardly, but this delta line can eat poisonous food without damaged.
Galvantula: Rumors say it’s webbing is coated with Botulinum toxins, killing prey within seconds. Once the prey is dead, the Galvantula eats the food with the web wrapped around it.
Update: now the sprite resembles the black widow just a little bit, with it’s legs being a bit longer. There were a few adjustments to Galvantula’s pattern, as well as Joltik getting a pattern as well. Thank you Dr.Bleh for the suggestion, because of your comment, now it looks better than before!

If you have any suggestions, please leave them down below, with the possiblity of them becoming a reality.

It’s off to a good start but overall it’s just a sprite change, make it look more like a widow, such as give it longer slender limbs. (My advise probably sucks and idk if you should truly follow it though)

I agree with Dr. Bleh.

Hey! I absolutely love your design and wish it was included in Pokemon Insurgence. However, I’m trying to create a fangame called Pokemon Vortex and I was wondering if you wanted your design featured in it