HI guys, girls and everything in-between! Following the EV episode, we tackle IVs. From all, THIS is, in my opinion, the worst part of making a competivie team before gen 7. Why? Let’s just say the way to get good legendairy is far more imporbable than getting a shiny one. That’s why I though it was basically impossible to have a competitive team without cheating until those Silver Caps and Golden Caps came into existence. Thank Giratina you have introduced Mint in Gen 8.
Open your books folks, school is on

Now, we shall address ine question: “Why the heck would I care about that?”

Hostility aside, IV stand for Individual Value or Inner Value. These can range from 0 to 31, giving 1 point per IV in a given statistic at level 100. Pokémon is a game of inches, every point counts. As such, having 30 IV in speed is far more dangerous than 31 IV. Why? Let’s see with an example:

Nope! If Latios have 1 speed less than Gengar, its chance of survival turn from ½ to 0 because Gengar will allways outspeed it and K.O. with Shadow Ball. Latios then faints and everyone cry because our blue friend loose its self confidence, not being able to communicate its pain to his trainer and Latias roaming in the wild unable to help him. Destiny is tragic.

Whe should note, however, that having 31 IVs everywhere is recommended to a lot of Pokémon, but not all. In fact, there are extremely good reasons to have less than 31 everywhere.

As most of you know, Trick Room create a filed where speed check gets upside down. The slower attacks first and the fastest is last. So, for teams around this playstyle, we do want to be as slow as possible except for one very fast Pokémon in case trick room run out. So, logically, we would want next to 0 Speed on the Pokémin using trick room. Truth is, there is no catch, it IS true. As you can imagine, every Trick Room Abuser would want a speed reducing nature and 0 IV in speed, or 1 to get specific Hidden Power type. More on that later.

As you know, Foul Play deal damages using the opponent base attack instead of the users, while also factoring in the burn. So, for Pokémon that aren’t using physical attack, using 0 IVs in that stat and an attack reducing nature so that Foul Play does as lass damages as possible. Plus, confusion damages is based of the users attack. Ever wondered why hitting yourself dealt far more damages afer an attack boost? Here’s why.

Although this is not really relevent, I think it is still important to keep in mind when Mandibuzz and sometimes Porygon2 commonly run Fould Play. For safety mesures, 0 IV attack when not necessairy is a good idea.

Funfact: Confusion get passed by Baton Pass alongside Roots and stats boost.

This is triggering someting in me. Hidden Freaking Power. You have NO IDEA how much Tapu Koko I’ve traded to the GTS to get a Naive one, and then see it have Hidden Power Dragon… AAAAAAAARG!

Hidden Power type is influenced by IVs in a very specific way. Here is how it is determined according to Poképedia:

And I know most of you won’t understand. Let’s try it another way:

Hidden Power cannot be Normal or Fairy type and is the only Fire type move that cannot taw a frozen Pokémon.
DiGLET IT GO!!!

As for Kartana, in order to get a speed boost from Beast Boost, it need 19 Atk IVs and a Timid Nature. Gimmicky, but still somewhat viable with Swords Dance. That also goes to show that a 181 base attack can still have less attack than a 109 base attack if not trained properly. Yikes.

As a side note:

Marowak in Gen 2 I think, only ran less than max IVs/EVs so an SD wouldn’t set it’s attack over the level cap, i.e. 1.

Sorry due, but you are wrong somewhere. At the time, in gen 1 and 2, there wasn’t IVs but DVs. They varied from 1 to 15 instead of 0 to 31 and are what looks to be currently used in Pokémon Go. Not that big of a difference, but you are true about Marowak spead.

How to change IVs

Short: You don’t.
Long: Its simple.

IVs cannot be changed the same way EVs does. The only way to change a Pokémon IV is by acheiving level 100 and spending an Silver cap or Golden cap in order to max given IVs. However, in Gen 7, changing IVs with those caps didn’t changed the Hidden Power Type, and this is something I prefer over IV stones.

If you happen to play Insurgence, you are familiar with IV stones. As opposed to caps, IV Stones cannot change more than one IV like the Golden Cap, they change the Hidden Power Type and can be used at any level.

The OG way to “change” the IVs are with breeding, topic I will be addressing in detail after Natures.

To see how much IVs you got, the player need to know the base stats and the exact EVs and do their maths:

Unless you are parradoxally smart enough to find the IV Judge. Its answer change depending on the IVs and it always change for every pokémon title except for Gen 8. Here’s the Gen 7 & 8 answer to the judge: 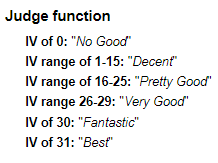 So, I don’t think I forgot anything crutial so far. There you have it! Next, I’ll be talking about Natures and then one that I wait for VERY long, breeding.
Get your minds out of the gutter. This is a family friendly forum.

Thank you SOOOOOO much

However, in Gen 7, changing IVs with those caps didn’t changed the Hidden Power Type, and this is something I prefer over IV stones.

why? iv stones make it so much easier to get a particular HP type cuz in this case you just have to get like 3 ivs right and then just stone the rest.

Get your minds out of the gutter. This is a family friendly forum

i wasnt even thinking about that, thanks

Because you can accidentally get the good HP type and use Golden Caps and also have Max IVs on speed and still possess HP Fire.

well ig but you could also just use a hp calc to see if you can still get hp fire by stoning. But in general, iv stones are better period. if the mon you want need hp dark/ghost BOOM you dont have to do anything, just stone everything . with 4 iv stones you only need to sr for 2 ivs since no hp (of bp 70) needs more than 2 non-31iv ivs

ok just checked some like fire fight etc require 3 or 4 but my point still stands. iv stones make it easier to get particular hps

True. I do think it would be better to have something like IV Mud that turn a given IV to 0.

Or just make some useless stone be an IV Absorber, or an IV adjuster which allows you to raise or decrease by 1 IV.

I would add both, so you can have certain HPs or Gyro Ball users or something.