Beat the League with a single Pokemon

Reukra: “I realize now there’s no such thing as a perfect Pokemon. Perfection comes from a team all covering each others’ weaknesses.”*
Me: *laughs in Mega Delta Venusaur* 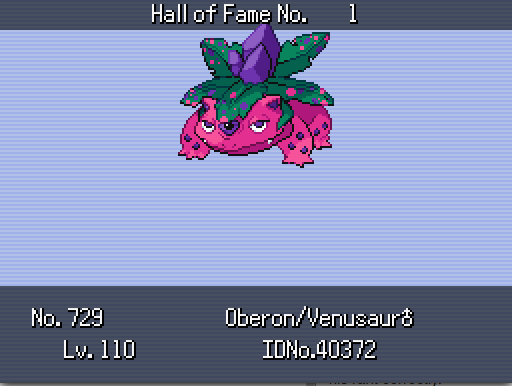 Disclaimer: I was not at all shy about reloading, partially because I was going in blind and learning the ins and outs of each Elite Four member, and partially because I wanted to see if it was at least theoretically possible. Sorry if the title made it sound like a flawless solo run. It would definitely be possible on a single try with a more scientific build. I also did it on Normal difficulty, there’s almost no way this would work on Hard.

First, the meat of the build. I ran Psychic/Moonblast/Shadow Ball/Calm Mind. Held item was of course the D. Venusaurite, with one exception, which I’ll get to. First turn, activate Mega, use Calm Mind. If there’s a Steel type or powerful Steel move coming up that you can’t outspeed, juggle Full Restores and X Speeds until you can. After that, it’s your standard Hubris steamroll.

The one held item exception I mentioned is for Kayla’s fight. There’s no way with this build to break through her Smeargle before it can use Spore and then have a merry old time maxing out its stats before Baton Passing to something at least marginally scarier. However, if you give your Pokemon a Chesto or Lum berry, then Smeargle will never use Spore at all. Cheeky AI is being too smart for its own good spying on your held items. It still might be able to pass a few buffs on to the next guy if you can’t kill it in the next turn or two, but it’s still a more manageable problem, one that’s worth missing out on Hubris for that battle.

In conclusion, Reukra was never able to create the perfect Pokemon because he failed to consider the simple and and expeditious solution of an amphetamine IV drip. Thank you for coming to my TED Talk.

*Or something like that. I wasn’t about to play through the entire game again just so I could copy his rant correctly.

Funnily enough, this experience entirely failed to teach me the importance of research and planning ahead. I did some EV training and got a better Nature from Pokepon during the postgame story, and when I went to do the rematch run, I thought I’d try to solo it again. And I did, right up until the Champion, when I discovered… well, if you’ve gotten that far, you know what I discovered. Serves me right for not scrolling down the wiki page.

unrelated memes aside, nice one-pokemon sweep for the e4.

I still can’t beat the e4 WITH A FULL TEAM.
WHAT.

If I won both regular and rematches with my sub-optimal team, you can do it as well. I believe in you.

Lol. I finally managed a no faint run with a level 112 primal kyogre i never used bc idk and the rest of mine were level 90 m-eevee primal giratina, and primal groudon. I had primal regigas and primal rks but they suck so i never used them.

In conclusion, Reukra was never able to create the perfect Pokemon because he failed to consider the simple and and expeditious solution of an amphetamine IV drip. Thank you for coming to my TED Talk.

Reukra did create the perfect pokemon. He was just too dumb to realize it.