Pokemon Insurgence was close to being my favorite Pokemon game in a lifetime of playing Pokemon when I decided to load up the third save slot and play a Randomizer Nuzlocke; my first Randomizer ever. Sped through the plot to get to my starter, and the game let me choose from three, of course: an Emolga; a Zangoose;

There were some losses during that playthrough, but I’ve made it to the endof the Beta pretty darn well with God on my side. Yes, Pokemon Insurgence is definitely my favorite Pokemon game at this point, though as you might imagine having Arceus made some events and trainer battles … amusing. I don’t know how many of these I’ll do, or even if I’ll do another, but I needed to share my gosh-darned luck with the community and I like drawing comics anyway, so.

I love this. The artstyle is cute and I always love the novelty of running into or having a legendary at the very start of a randomizer game. Especially god tier legendaries.

Thanks for the kindness, guys.

My absolute favorite moment in the playthrough probably came during the Vipik City Gym, especially since it was a Nuzlocke challenge run: 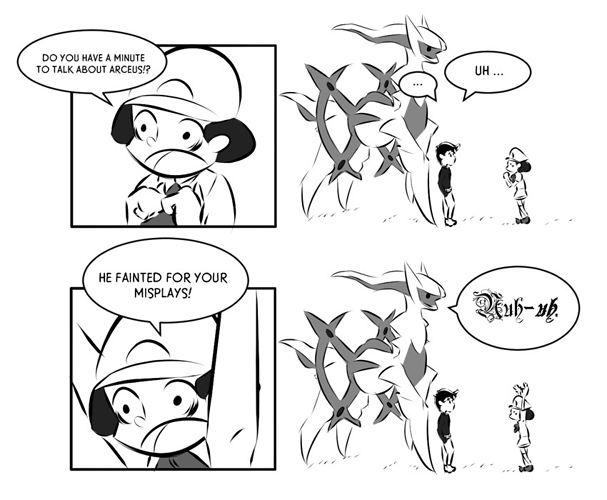 These are fantastic, I love them so much

I’m torn between saying a casual, cool, “Thanks!” and a giddy “Senpai noticed me.”

I just did BOTH

OMG, your comics of insurgence is amazing, i just love how arceus looks :D, Great job! Hope to see more insurgence comics like this from you in the future.