Trouble with "Thanks for the ride" mystery gifts

Hello. I recently downloaded/installed the new Pokemon Insurgence 1.2.3. core(Im a mac user, so no patch) and noticed that there were now 2 mystery gifts, “Thanks for the ride!(1)” and “Thanks for the ride (2)”. However, when i attempted to claim both, i got the pictured error messages, and the game auto quit/crashed. 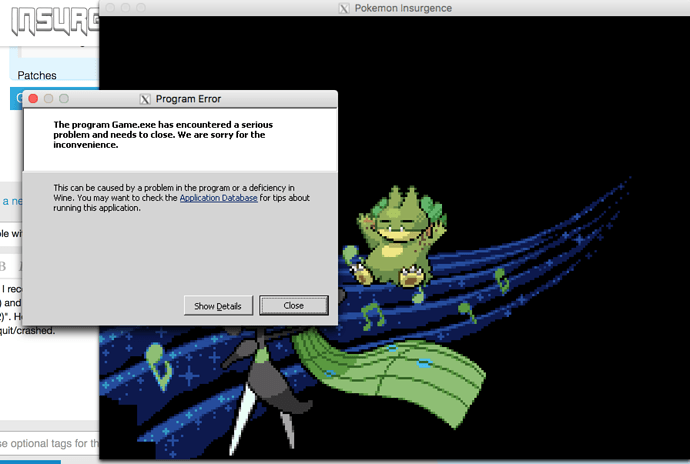 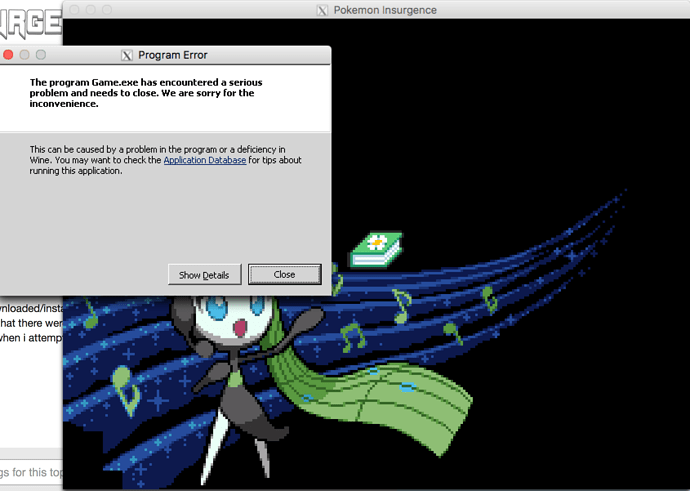 I’m having the EXACT same problem. Also using Mac, but 1.2.2 core- I couldn’t seem to get the 1.2.3 core off this forum for some bizarre reason (Every time I click the link, it just opens a tab of the exact same post.) However anyway, I’d love to see if anyone has an answer for this issue with mystery gift! Kinda sad that we can’t get it currently. Haven’t seen any windows users having that issue yet.

@CactusJak @Foxxie Does this crash occur only when you get the mystery gifts? By that, when you accept mystery gifts from the menu or claim them from the delivery guy in pokecentres?

Or does it occur when it when you win a battle or any other place as well?

In my case it’s when I accept it from the menu. I haven’t had problems with the game apart from that, but I’ll have a little quick look to see if it crashes in battles.

So, hurrah! I downloaded the core you gave me, checked the mystery gift, it allowed me to accept it without a single crash. I was also able to get the gifts from the delivery man without a problem! That’s kind of interesting.

As far as I have seen, this crash occurrs both when i attempt to accept mystery gifts from the menu, and when i win a battle. I haven’t encountered it anywhere else, though that could be due to not encountering it yet.
Also, attempting to wonder trade from the “Dex’nav” results in just a blank background after selecting the pokemon to trade from the pokemon i have on me, and the only way to escape it is pressing escape. I know this is a problem unrelated to my original post, but felt it was something i should mention.
Edit; I downloaded the mirror mac 1.2.3 core, to see if that fixed it for me like it did foxxie; Instead, whenever i tried to open it, it got this;