I went to the Miara Museum and went up to the man guarding the blue orb, I replied with no by accident and walked past them. After doing this, I walked back to him and replied that I would like to see it. He walked me up to the orb and I believe that my game froze. The only thing I am able to do is toggle auto-run. I’ve been stuck for about 15 minutes and I’ve closed and re-opened the game. I would really like to keep playing because I love the game. Please help. Thank You

Revert to a backup save.

Autosave was on and put me back in the same place

All three? I’m not sure what you can do then other than starting a new game.

I recommend not having autosave on, it makes things more problematic(like now), and manually saving isn’t troublesome at all.

My bad, not autosave. I meant the quicksave button. I’m not sure what you mean by all three either. If you’re referring to the other possible save files then I’m not sure how that would help because they work with other files (different pokemon and different points in the story). If you have any solution to restoring the game back to the last manual save of that file, then please let me know. If not, then I suppose I’m fine with starting a new game. Thanks for the help regardless.

Game.rxdata is your save for the default slot, it’s backups are Save_0_Backup_1.rxdata(most recent backup for save slot 1), Save_0_Backup_2.rxdata and Save_0_Backup_3.rxdata(oldest backup).

Second and third slots are Game_1.rxdata and Game_2.rxdata respectively, with their own backups.

Simply delete (or rather preferably, move away) your current save file, rename the backup of your choice to Game.rxdata(change according to save slot). The backups update every time you save ingame. 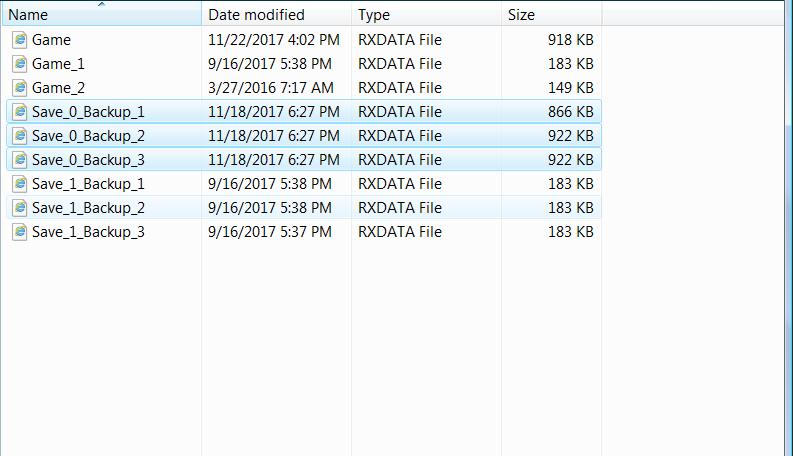 when a new patch is released you are teleported in a town for safe patching, so you have two ways :

1 wait a patch or install a previous version, save and reinstall the new version.

2 load a backup save

I would just like to clarify so I don’t royally f up the saves. I should delete Game.rxdata and then rename Save_0_Backup_1.rxdata to Game.rxdata. By doing this what should I expect to happen? I trust that this is the solution but I would just like to know where it will put me back to, the last time I manually saved? Ty

Yep, hopefully it wasn’t too far ago.

If it still lands you at the glitched place, use the second or third backup.

I’m still in the glitched spot after deleting and renaming all three save files. I can just wait until whenever the next patch is released and see if that works. I’m pretty far into another save so I guess that I’m fine. Thank you for your help.