Okay so I had a bug in a game where I didn’t get the Abyssal DNA from Damian in Utria Town. Apparently you could move your saved game from 1.1.8 down to a lower version and then that would allow you to enter and continue. I couldn’t find the locations so I just gave up and went back to open up a different file, but when I entered the game, everything was gone. Going back into the folder, there was a folder that held back up saves that all I did was look inside, and it’s now gone. I know that has something to do with it, but I didn’t move anything. Am I just going to have to start everything over?

Edit* I did a little more looking and found Save_0_Backup_1, and similar files with a 1 and 2 in place of the 0 and 2 and 3 in place of the 1. If I copy these into another folder, the saves should be back, correct? 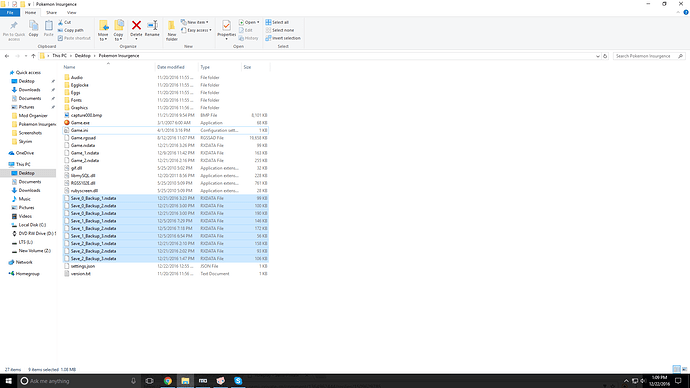 You need those and game.rxdata, game_1.rxdata, and game_2.rxdata. with that said I’m not really understanding your issue…

Whenever I open it treats as if I’ve never played before. I tried this again and it prompted me to do a repair, and that’s almost complete. Hopefully that can fix it.

Found it and it’s working again! Thank you!

Okay, if its working then enjoy the game