I know they look pretty crappy but I was wondering what you all think?
Delta Tauros

With the spike and tails or without? I’m still working on it so the colors are off, the extra parts that will be going on it and the back side (It’s so sloppy) but some advice would be helpful since this is my first time and I still got more to work on this before I even think of submitting it. 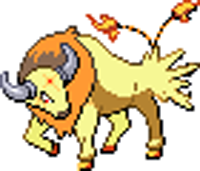 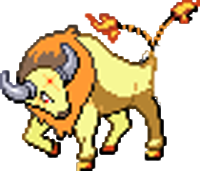 i prefer without the spikes, but it looks good

I think the spikes should stay. Why? Because without them this looks like re-colored Tauros that just happens to be missing a tail… and according to the rules mere re-colors aren’t enough to be considered Deltas. There has to be a few physical changes and/or tweaks for it to count. I’d probably change his mane to look all spikey too, not just the rear-side… maybe add another extra pair of horns too (pointing backwards instead of curved) with electricity jolting between them if you want to make it an electric/fire type.

oh true, wasn’t thinking that far. But your right and i like the suggestions, I think that would make it much better. Again its still a good sprite

I like it, but, in my opinion its just a recolor with flames at the end ofbit’s tails and a cross where the spikes would be. One thing that would change my opinion would be to make the mane into fire.

As said before, you need to add features to it instead of a recolor. The color is a good point to start off with, but it won’t make a Pokemon a Delta. Change up his mane, horns, tail, fur and add some things that make it stick out of the regular Tauros.

The spiky part of the tail is obviously looks taking off Jolteon, try to make some touch ups on that so it won;t be noticeable. Also, positioning the tail ends to the center according to the tail so it would look natural. Make the fire at the tail tip more prominent. And change the fur around its face to a flame.
You can use some sparks around the horns too.And maybe shaping it for a more electric resemblance.