Need help with my team

I had a hard time against the E4 the first time, it was frustrating and so I decided to build a new team but not only for the E4.

It turned out to be terrible too, can anyone help me to improve that?

Okay, so I have a few questions, first, why double-edge and head smash on aggron if you plan for that to be your mega and it loses rock type STAB upon mega evolving? I don’t think Delphox is the best mon, but it might work, idk, I haven’t really much experience with the mon. 2nd steel type, petal dance as a special attacker? Leech seed I wouldn’t say is the best move for it. Dark Matter Volcorona is not great, and neither is a physical move on a special attacker. Ominous Wind is subpar, and spacial rend is okay. Needs better moves on it overall. Kingdra is Kingdra. Yawn/Ancientpower Togekiss…I don’t think that is a particularly great set.

Okay so, I don’t think you need 2 steel types, and having another physical attacker would be nice. Maybe Delta Snorlax would be better?

First, Thanks for the input! That’s my first time trying to actually build a team, usually I “just play” you know.

Well, I did not want it as my mega so much but I did not have any good item to give it (I still don’t know what to give it) and it was the only one I had capable of mega evolving in this team.

Delphox is like the second best if not the best up to now, which isn’t much considering the team but I think it is promising.

Yeah, you’re right, the Delta Noivern wasn’t really great choice by itself, It’s movepool isn’t great either, I thought of using Delta Snorlax, but it was SO SLOW that I decided not to use it, but in second thought it was a dumb choice.

Volcarona wasn’t intended to have Gunk Shot, I just forgot to change it, it’s Sludge Wave now, but Dark Matter was intended. I don’t know, what would be a better choice for it?

Putting the adversary to sleep is good and ancient power is good against Bug and Ice, and since it has Serene Grace as ability I thought it would be better than Flamethrower or Fire Blast.

Yup, I already decided for Delta Snorlax, even tho It’s super slow and it’s defense isn’t the best I’ll give it a chance. But I still want something else to mega evolve instead of Aggron.

Just to clarify, which point in the game are you right now? Delta Larvesta cant be obtained before the e4 if I remember correctly.

Nah, I don’t want to have it easier, I want to be better.

After Taen quests, Already caught Arceus, Hoopa, Deoxys and Darkrai, Creselia, all the three dogs the Swords of Justice, Mewtwo and some more stuff…

Your team seems very nice! A few things I think could be improved:
Giving Togekiss either a fire move or aura sphere so it isnt hopeless against steels, and giving Delta Volcarona Hyperspace Hole, Toxic Spikes or another move instead of ominous wind, since ghost coverage is very similar to its strong Dark STAB.

Oh, I like your tips! Gonna do it too! Thanks!

One more thing, if you need to change a mon, swap for a physical attacker. You currently have 5 special attackers, so a special wall like Milotic might give you trouble, especially if Aggron is knocked out

I was thinking for delta volcorona just giving it coverage, dark pulse, or toxic spikes. Those would be good. Shame it can’t set up, but it is pretty useful defensively. The base power of ancientpower is just not worth it to me. Also aggron is not too bad of a mega, definitely makes for a good physical attacker/wall (stats and filter make it good). Just make sure to get elemental punches in nexa town if need be.

Ok, so an update, I changed two pokemon from the team, some EV distributions, changed some of their moves. Man, it was so worth it already. Kayla was the worse one for me to defeat the first time and I wanted revenge… And my Togekiss just swiped through her team SINGLE-HANDEDLY without loosing any HP AT ALL!!!

Thank you so much for the help guys!! 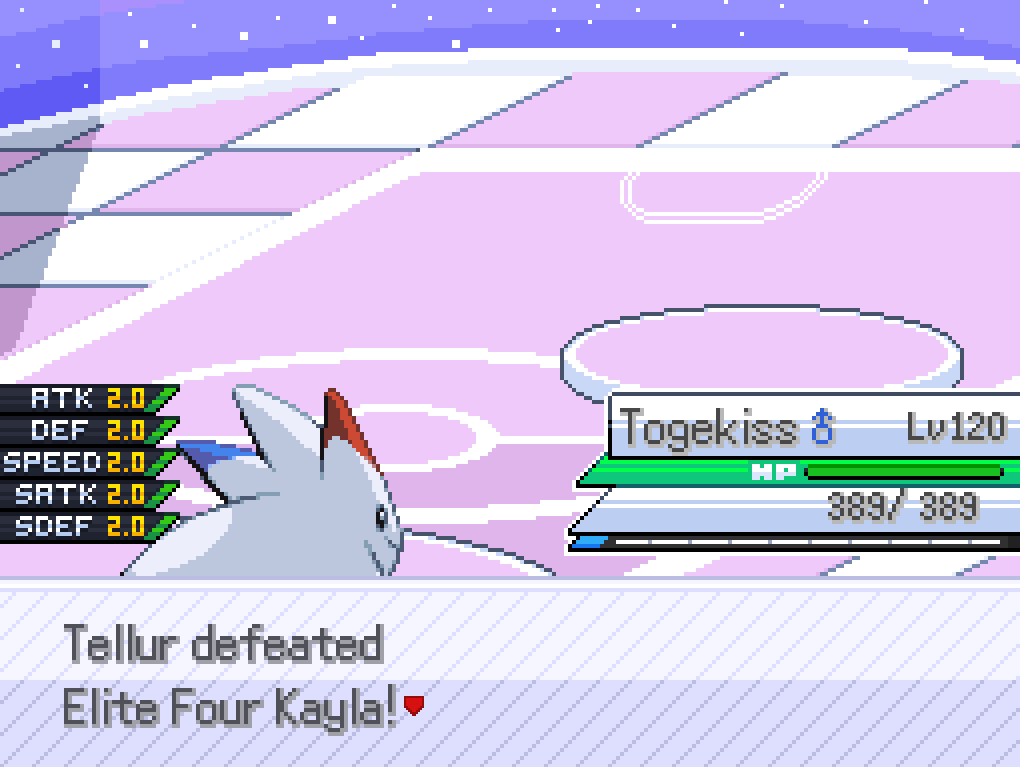 Well, thats what happens when ur overleveled lol. How much time did it take you to grind lvl 1 pokemon all the way to 120 8 times?

Their levels scale with mine so it does not help much. And it did not take that long with Lucky Eggs and the Audino trainer (The Trainer Trainer), it took much longer to farm the IV stones and to breed then, not to say the pain it was to find the many different nature Dittos and that sort of stuff! And I was also bit lucky with her, the other ones were a bit harder than her, but still defeated all first try even the champions. Overall I’m Super happy with that new team! AND with something else that i just found!!