I was EV training my team of Eeveelutions, and i left the secret base (i forgot whose) and the screen went black as if loadingthe next map, then it returned to the same secret base with me stuck in the tile ahead and I can’t get out
Please help D: 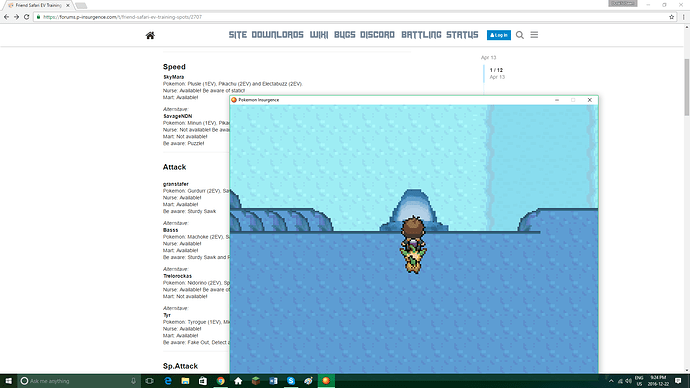 Try using the tablet? If that fails, you’ll have to load a back up save.

What do you mean using the tablet?

Edit: I used the Tablet to ‘Exit Base’ thank you so much, I’m so relieved. I didn’t want to lose all my progress :DD

I couldn’t find anything anywhere on how to fix my problem, until Sleepy mentioned the Tablet lol. So it’s not like i ‘ignored the search function’

Are you using mini evil base?

I was at someone else’s base… and this already has been solved. D:

I know. Please answer though?

I did. I was at someone else’s base, so it’s not my base, but it was an ice/cold theme base as you can see by the screenshot. found out whose base it was, but it happens with all the bases though. So it’s not just that specific base, but that was the first time I ever got stuck in a spot.

Okay I’m asking if you are using the mini-evil base.

Because it is glitched, because of it you will 1) have no pokemon in your friend safari and 2) get stuck in people’s bases like this. If you change it (I recommend the ice one) the problem will never happen again.

Also, did getting a hair dye work for your issue a month ago?

But that same problem you’ve had has been posted several times, and the solution was the same. I just checked.