For context, I have done several previous runs through the game (none on Hard tho) and decided to try to beat it with some 'Mons I hadn’t used before. I also played in an Egglocke so I could get a full team of 6 at the start, as well as good abilities, good items, and max IVs Also, I never EV trained any team member. Overall, a pretty fun challenge! Debating whether to continue into postgame. 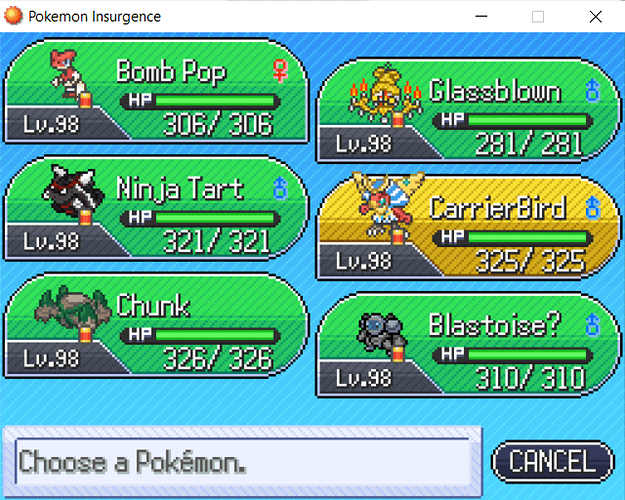 Screenshot 2022-02-19 082143641×512 99.6 KB
Honestly, all the team members had some carries:
Delta Blaziken (as implied by the name) was able to revenge-kill many foes with Gale Wings + Brave Bird, which led to easy cleanup of Kayla and general usefulness.
Delta Blastoise is an incredibly powerful team member with Mega Launcher, Dark Pulse, Dragon Pulse, and Nasty Plot. At earlier points in the run, it was sacrificed to set up Taunt when needed.
Delta Sceptile with Guts and Flame Orb was the only reason I was able to beat Xavier. The. Only. Reason. This was the 'Mon I had specifically chosen to be part of the team, and he performed outstandingly.
Delta Chandelure was great against Taen’s dragon-types with Fairy Aura-boosted Dazzling Gleam (didn’t wait to get Moonblast).
Delta Metagross has an incredible moveset with both Head Smash and Wood Hammer with Rock Head to eliminate recoil. Losing Rock Head is the main reason why I never Mega-Evolved it.
Delta Magmortar is a pretty solid team member, with good stats as well as Filter to reduce Super-Effective hits. It also has great coverage.
I also had a couple of swap-ins:
Delta Typhlosion, who pretty much swept Calreath and was great against Audrey, and
Delta Bisharp, which I used Rare Candies on to evolve before the Flying Gym for an extra boost to the team.
ezlaturbo February 19, 2022, 5:50pm #2

BTW, if you get Aura Sphere over Dragon Pulse on D. Blastoise, that may be a good change. Mega Delta Ruingross still has Rock Head btw, only the Crystal forme loses it.

I had all three pulse moves on Blastoise, and Blastoise and Typhlosion were my Megas of choice. Metagross could pretty much stand on his own lol