Character Description:
Both Eizen and Nori are from the expanded Ultra Megalopolis after the conflicts in USUM, and are recruited into the Ultra Recon Squad for Ultra Beast stabilization. They’re both very cheerful and self-aware when it comes to their weird heritage and customs. Armed with the universe’s finest, they will give you an “ultra” welcome. They are a duo, and after doing several task missions across the several Ultra Spaces, they decided to take up competitive battling in order to pass time and train their Pokemon. They function similar to Sinnoh’s Battle Castle, as their will technically be two Brains. Eizen, the older and more defense-oriented of the two, will challenge you at the end, as Nori stands on the sidelines. After the battle, Nori will tell you to battle her outside of the establishment without a level cap. They will both congratulate you and keep you in mind when they’re called to action again.

Battle Frontier:
Battle Pyramid: Each floor will mimic a different ultra space. The wild Pokemon battled will only be those that could theoretically survive in the Ultra Space it’s mimicking. The final stage of the pyramid will resemble the Ultra Megalopolis in aesthetic. The establishment will obviously look more futuristic than in past iterations. 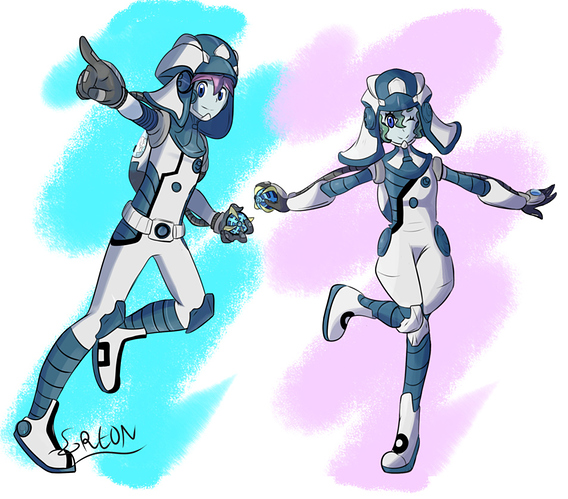 The art is drawn by myself.
https://www.deviantart.com/indieplex/art/Recon-Recruits-736208905

Pokemon teams must be Pokemon that exist in Insurgence. No gen 7 pokemon or nonexisting megas/deltas unfortunately cant be accepted.

Sorry, I didn’t get that memo. Let me edit the team selection to make it fit better. I hope the pure existence of the recon members isn’t a disqualify-er