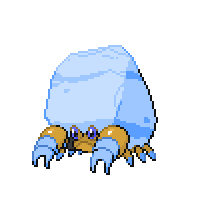 Looks just like a recolor to me. Perhaps color the rock so it looks like ice instead of a blue rock.

Instead of recoloring the rock, why not replace the whole rock with a big chunk of ice like the one on bergemite.

I redesigned the Delta Crustle. 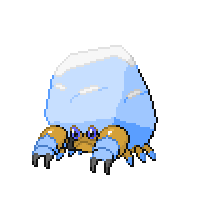 I like it. But it kind of looks like a recolor, so maybe add some snow falling off the top? Also, I tried but I really can’t see ground typing at all.

Just looked at your Delta Dwebble - if I may suggest - maybe a “Dirty Snowball” theme for this evolution line would give some ideas! Like a Dwebble/Crustle that’s using a hunk of ice and dirt it found somewhere instead of the layers of sentiment. Dwebble already looks like a little round thing - a pebble (heh) or a meatball. When it evolves into a Crustle it could be a dusty glacier on its back, or the other way around - a snowed-on hunk of dirt. Either way, I think you’re doing a really great job! Maybe lighten up the shade of the Crustle “bug” part?

I made a Delta Dwebble to go with the Delta Crustle.

Please keep these in one post, to prevent spam on the artwork threads. Thanks!