An alternate form of blind run?

I’m thinking about using an Egglocke to have a fixed set of six Pokemon. This way, I can just roam around the whole region and experience the plot without too many worries. I just came off what I call a “partylocke” in Sword where I bred six specific Pokemon and “locked them in” to my party on a fresh run. It was quite the interesting second playthrough, but could make for a nicer, more merciful first playthrough of Insurgence.

I came into this game expecting a challenge, but didn’t expect the old school EXP system to be in place. Funnily enough, I wished this was an option in the more modern games, and this was a harsh reminder as to why things changed. I want to experience the plot, but for once I don’t want to watch it on YouTube, and want to be there.

What would help me a lot, is having a familiar team mixed with new faces. I’m not going to go without that Delta Charizard, that’s for sure.

Is this an acceptable first full playthrough to you guys?

And if it is, is there a downside to having only six eggs on the file?

Well, less options if you see something you want. And why are you worrying about what we think about your playthrough? It’s your playthrough, play it your way. (I think Nintendo or some other VG company used that in an ad.) It’s definitely easier then grinding for IV Stones and Natures. Makes it a bit harder to shiny hunt though. If you have a full file of Eggs, you won’t get a guaranteed Egg from your 6, so I’d just stick with bringing the mons you want to use. You may want to add some others, as it’s nice to have options though.

Ha, I was thinking that I overthought it. Can’t wait to showcase the game to my best friend, we’ve been Pokemon fans since we were kids. Thank you so much for getting back to me, as it made me feel so much better. I hope this thread eventually helps somebody else out too.

I figured I’d update on what my final decisions were. I added a lot of different eggs to balance out the team, as you suggested, ezlaturbo. Sure, it was mostly because I wanted to add Experience Shares to emulate the modern day experience system, but that quickly backfired. Surprisingly, some of my new eggs did make the cut. I ended up adding Larvitar, Cyndaquil, Lapras, and a bunch of other variety. Although it can be noted that as a Dragon tamer, I have a particular bias against Fairy that drags me down. I guess it’s a form of challenge run in itself to be able to overcome one of those with a Dragon.

Funnily enough, one of the lines in game says, “I wonder how a little Jigglypuff survives a big old Salamence.” It doesn’t. Slash, Flamethrower, Fly, and other moves ensure that said Jigglypuff is a terrible example to make. I could say Clefairy is a better example as it’s tankier, but that’s besides the point I suppose.

Final main team ended up being this: 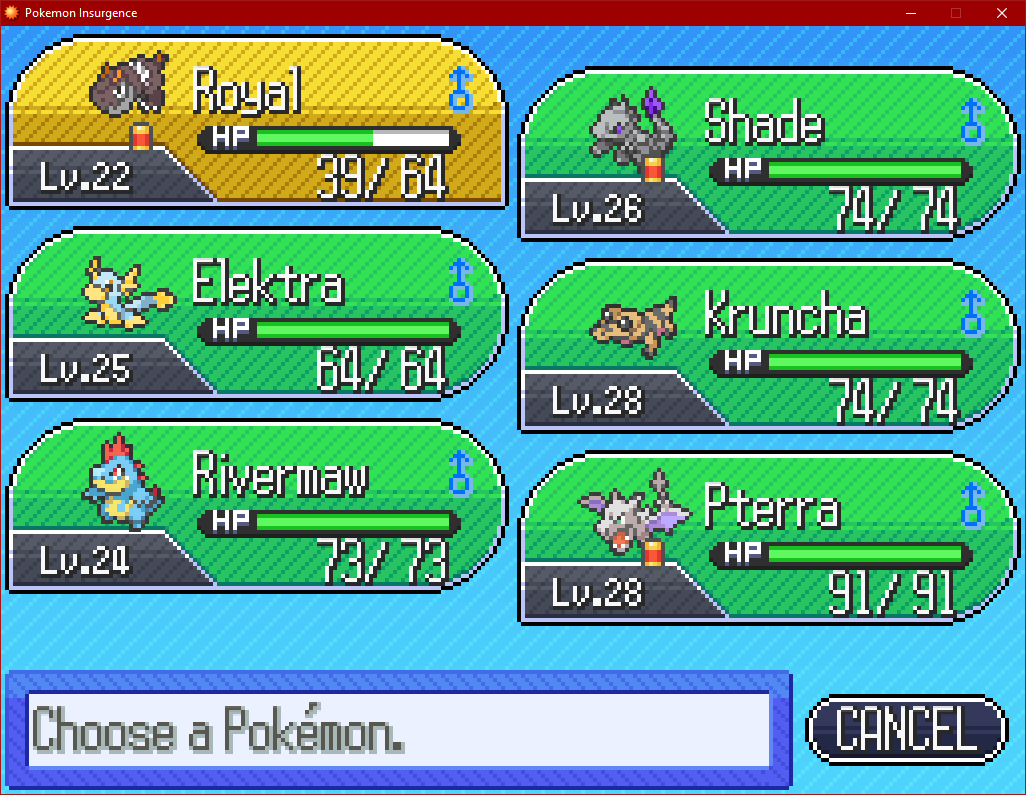 I ended up with an issue that should be patched out for the sake of others. Here’s a link: In the egglocke mode I got a glitched gender swap

Anyway, I’ll lay it out right here: if in the far future a necroposter finds this thread relevant, please let them post. I think I might be able to help them out at that time. I suspect I will be involved in this game for quite some time to come, as it has brought back countless memories of generations 3-5, and of Alpha Sapphire. Insurgence is one heck of a fangame

It’s really nice to have all these bredmons+items of choice at the start of the game, though the randomness kinda makes up for it. A fun type run though, and I hope you stick around cuz this forum needs more active members.